For most Americans, World War II is nothing but a distant history lesson. As the people who lived through it slowly die out, it doesn’t really seem to exist outside of textbooks, tombstones, and the occasional war movie.

But for Germans, memories of the war are a daily reality and cannot be escaped.

Some reminders of the war are intentional, such as the thousands of Stolpersteine (“stumble blocks”) that dot European sidewalks as a reminder of the evicted and largely murdered Jews who used to live there.

Others are less intentional, such as the multicolored stone blocks of the Dresden Church of Our Lady. The cathedral, the city’s pride and joy, was bombed heavily in World War II, and was reconstructed during the 1990s. Builders tried to use as many of the original stones as possible, which were blackened with soot from the flames, while the newer stones are much lighter in color.

Perhaps the most disturbing unintentional reminder is the number of unexploded bombs still buried in Germany today.

Last summer, shortly after I moved to Hamburg, I was shocked to read headlines one day in the local press saying one area of the city was being evacuated and the public transportation was disrupted due to the discovery of a World War II-era bomb in a residential block, which the fire department was trying to defuse. As I frantically scrambled to share the story on social media, thinking I was on to some breaking news, one of my friends informed me that this is actually not that exciting, as it happens in Hamburg alone at least twice a year.

After doing some research, I discovered that this incident was indeed commonplace. Der Spiegel reported in 2011 that around 5,500 unexploded bombs were found in Germany each year, with a daily average of 15. Now there’s something that will help you sleep at night – thinking of the estimated 600 million pounds of 70-year-old undetonated explosives buried just beneath the surface in Germany’s cities and countrysides. There’s even a term for it – unexploded ordnance. And while it seems rare that people are injured nowadays in bomb explosions, just think of what could happen if Germany were to go to war again. The land is a veritable minefield, with many of the bombs containing worn-down chemical fuses that will make them incredibly volatile, such that sometimes a mere vibration is all it takes to set them off.

Besides the bombs, casual reminders that World War II and the Holocaust happened are ubiquitous.

Hamburg University, for instance, is located in a formerly Jewish part of the city – former, because of the Holocaust. Besides beautiful white houses built in art noveau style and a noticeable increase in Stolpersteine in this area, many tributes to fallen Jews quietly remind passers-by of the country’s dark past. 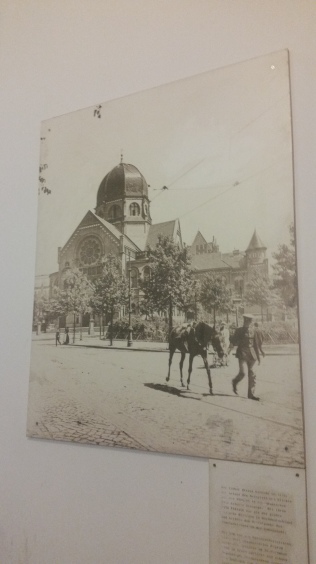 Various signs commemorate the former site of the largest synagogue in northern Germany. On November 9, 1938, known as the “Night of Broken Glass” (Kristallnacht or Pogromnacht in German), the synagogue was set on fire. The damage was bad enough that it had to be torn down. The plaza it once stood on has been left empty as a reminder of the loss.

Despite all of these little reminders of the past, Germans don’t actually talk about the Holocaust that much, because – well – there isn’t really that much more to be said. It is a shameful part of their history that destroyed the German national identity for several decades, and the resulting distrust of patriotism still lingers today. But, as I pointed out to one of my friends, most Americans probably don’t engage in deep thoughts or conversations about the genocide of the Native Americans every time they drive through an Indian reservation or pass by a city with a name like Seattle or Puyallup. People are still mostly focused on their daily lives – going to work, going to the store, meeting with friends. Yes, every German child has to learn about the Holocaust in school, and no, it won’t be forgotten. But it has also been 70 years, so although that part of history is still tangible and visible in everyday life, it has faded to the background of most peoples’ consciousness. Germany will never forget, but it’s not something Germans dwell on every day, either.

2 thoughts on “Living in the shadow of World War II”

Storyteller. Content creator. Digital native. Originally from the U.S. and now living in Hamburg, Germany, I write different types of content in English for a living. Twitter/Instagram: @alison_haywood