One beautiful, hungover (just kidding, Mom and Dad!) Sunday morning I decided to make a day trip to the beautiful little town of Wittenberg, Germany. Wittenberg is the birthplace and hometown of Martin Luther, the Father of the Protestant Reformation. It is where he famously nailed his 95 Theses to the church door citing his criticisms of the Catholic Church at that time.

I went with one of the American students from IES, Sydney, with whom I had bonded with during the European Capitals Tour. We were greeted by this helpful little sign at the train station! 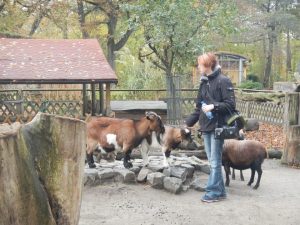 Since the town was so small, we decided not to bother buying bus tickets. On our way to the Historic Old City, we found a zoo and proceeded to waste time gawking at animals that exist in the States, too. I made friends with some goats.

We got to see the doors where he nailed his 95 Theses on that fateful day in 1517. The original church burned down/was bombed multiple times throughout the years (funny how that happens in a country that’s lost a lot of wars! And I’m not just talked about WWI and II either, the English were bombing the crap out of the Germans way before then) so now there’s a bronze replica of the doors with the Theses carved into them. Unfortunately the church was undergoing renovation, so we couldn’t go inside to see the graves, nor could we even get close enough to read the carvings. It was still cool.

New life goal: Return to Germany, specifically Wittenberg, in 2017 to celebrate the 500th anniversary of the Reformation.

We also visited the Lutherhaus (Luther’s House, for those of you really inept at figuring out cognates in foreign languages), which is now a museum. It was a HUGE museum. I learned more about Martin Luther’s life than I ever had before. For instance, did you know there were actually people who came before him and had similar revolutionary ideas? They just all got excommunicated and/or burned at the stake before they got a chance to nail any papers to a door.

History lesson: Some of these criticisms of the Church, which are generally attributed to Martin Luther although now I know the ideas existed before his time, included: The Bible should be translated into German so that regular people, not just the educated ones, can be able to read it. (Before it was ONLY ever printed in Latin. The Luther Haus museum had a bunch of copies of old Bibles and other books, some written in Luther’s own hand.) People should NOT have to go through the church bureaucracy to reach God, they should be able to pray directly to Him and He will listen.

And of course, everyone’s favorite, no more indulgences! Indulgences are a way of buying your way into heaven, so to speak. You pay the Church the monetary equivalent of whatever sin you committed. (E.g., you fixed your broken cart on the Sabbath day, you pay 10 marks. You cheat on your wife with the neighbor girl and murder her husband and steal his goats, you pay 50 marks.) This was a great way for the Church to get rich quick because they had a monopoly on heaven. Needless to say, God didn’t have much use for the money so it mostly wound up lining church officials’ pockets.

I made friends with Martin Luther’s wife. It was a REALLY big deal that he was a monk and took a wife. Lots of people accused him for revolting against the Church just because he wanted to marry her. But we know better. That’s why Lutheran pastors are allowed to marry.

You’ll be happy to hear that Martin Luther himself helped with installing running water in the monastery. I’m not saying he didn’t do a good job, but after 500 years the water tasted a little funny. I couldn’t believe it was still running. Sydney couldn’t believe I still drank it. (I realized quickly this was a bad idea.)

Storyteller. Content creator. Digital native. Originally from the U.S. and now living in Hamburg, Germany, I write different types of content in English for a living. Twitter/Instagram: @alison_haywood