The weekend of November 11 I made a weekend trip to Cologne to visit a friend. I had no idea it was the first weekend of Karneval.

Plan A was to catch a carpool with Mitfahrzentrale.de, a carpool website, and I had a ride organized and everything, but as I got to the parking lot we were meeting at at 7am on Saturday morning, the driver informed me that he had given up my seat because he “wasn’t sure if I was still coming.” I guess what happened is he called me that morning, while I was in the shower, from a different number than the other two we’d been communicating with, and since he didn’t receive an answer and I didn’t call back (because I didn’t recognize the number) he assumed I wasn’t coming. Even though I texted the number we’d formerly communicated with to tell him I was on my way. So that was stressful and frustrating – almost in tears I called my boyfriend, who unsuccessfully tried to call everyone else on the entire website who was going from Berlin to Cologne that morning, and eventually I had to buy a last-minute train ticket.

BUT I finally arrived in Cologne just as it was getting dark outside. My friend, Jon, met me at the train station. Jon and I lived in the same wing of the same dorm my freshman year at college. He graduated when I was a freshman and is now going to grad school in Germany. His university is in a small town in Baden Württenberg called Kaiserslautern, but he was making a weekend trip with a group of friends from his university to Cologne for the Carnival.

It was fun catching up with Jon and he showed me around a couple of things. It was raining heavily and starting to get dark when I arrived so I didn’t take many pictures that night. We went inside the Köner Dom, the big cathedral that’s right next to the station, and we went up to the top of the Kölner Triangle, a big modern glass office building. Theoretically there’s a great view of the city up there, but like I said, it was dark and raining, so we weren’t even up there for five minutes before we went back down.

After getting thoroughly soaked in the rain and me stepping into an ankle-deep puddle, me and Jon met up with his friends back in the main part of town and went out to a restaurant for some drinks and, in my case, food. I saw a tempting-looking vegetarian dish of Mediterranean vegetables on the menu and was about to order it, when I thought, wait a minute, I’m in Köln. I want to eat something Kölnisch (or Kölnsch, as they say.) So I ordered a dish which contained Blutwurst, or blood sausage.

When my food arrived on the table, the Germans among us started laughing. “Hope you like it!” they said. And, “you’re very brave!” And, “very traditional  Cologne, that is!” I had no idea but apparently blood sausage has quite the reputation, and not because it’s so delicious. The first bite was the worst. I wasn’t expecting the soft, mushy texture at all. As a person who eats mostly vegetarian but eats white meat and fish on occasion, the dark red liver-type meat almost made me gag. It had a mild, salty, beefy flavor, but the texture – somewhere between refried beans and mashed potatoes – was the worst. I was proud of myself for eating one whole sausage. Mixed with copious amounts of applesauce, it wasn’t too bad. What an experience, though. I had nasty sausage burps the rest of the night, too.

After dinner we took a train to Bonn, where our hostel was (since all of the hostels in Cologne were booked full.) It was fun bonding with all of Jon’s friends. I guess the university (or tech school) he’s at is almost entirely international students, even though it’s in Germany, so although everyone was learning German, English was actually the language we had most in common. Our group consisted of Americans, Germans, east Indians, a Russian, a Mexican, and some Turks. I have no idea how they all knew each other.

The people who hadn’t eaten at the restaurant grabbed some fast food on the street (Vier mal Dürum Döner, bitte!) and a Turkish girl was excited to speak Turkish with the owners of every Döner stand we passed. We kept an eye peeled for bars and pubs between the station and our hostel, but everything was strangely closed for a Saturday night. We joked that the owners were all in Cologne. We checked into our hostel, relaxed a bit, then went out and eventually found a busy little bar to hang out at. It was quite funny, the East Indians and the Russians and Turks had quite different ideas about drinking. This one girl was prepared to get smashed that night, but the guys from India just ordered sodas. I had one mixed drink, and most people just ordered beers. It was really fun, just talking and getting to know everyone.

I woke up relatively early the next morning and met Jon for breakfast in the hostel. The sun was shining and it was a beautiful fall day, so I took lots of pictures. 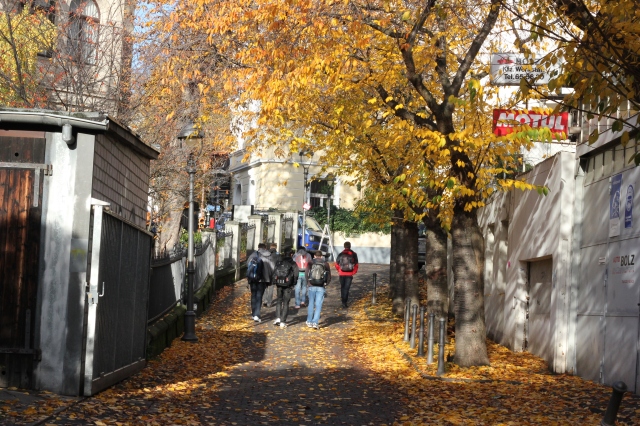 We decided to spend a little bit of time in Bonn that morning before heading over to Köln, since it´s such a nice little town. We saw Beethoven´s house and his grave, or some sort of monument dedicated to him. You weren´t allowed to take pictures inside the museum house, but I bought a lot of stuff (mostly sheet music) from the gift shop. 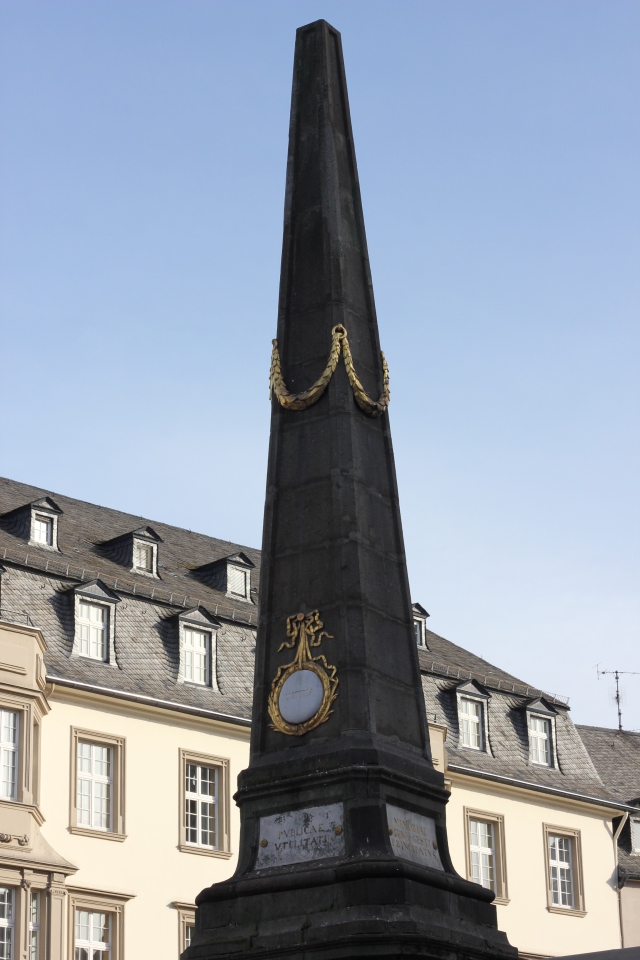 We took the train back to Köln around noon. The official opening time of the Karneval was 11:11a.m., but we spent too much time wandering around Bonn to get there by then. They were already starting to decorate the train station for Christmas!

The sky was clear, a live marching band was playing, and people were dressed in strange costumes all over the place.

The Karneval was pretty crazy. Normally all the stores are closed in Germany on Sundays, even in a big city like Berlin, but because of the Karneval EVERY bar, pub, club, restaurant, and cafe was open. All of the bars and clubs were packed full, too, and many had lines of people going out the door into the street of people waiting to get in. At 2pm on a Sunday!

It´s Germany, so of course there was lots of drinking. It contributed to the festive atmosphere. Every once in a while you´d see someone sitting on the sidewalk with their head in their hands, or on the ground leaning up against a building or something, because they started too early and didn´t pace themselves. Not everything about the alcohol culture is fun times. And there were obnoxious groups of young people being super loud and bumping into people. And TONS of trash – broken bottles, broken glass, plastic, paper cups, napkins, etc – lining the streets and every flat surface. And this was only the first day!

By late afternoon we were getting tired of walking and starting to get hungry, so we walked across the bridge to the other side of the city where there wasn´t a party going on and looked for restaurants.

We eventually found a nice little restaurant and enjoyed dinners of the most delicious onion soup I have ever had, with lots of melted cheese on top. I left and met up with my carpool driver without a hitch, and was back in Berlin later that night. All in all, a super fun weekend and a great experience!

We stayed in pretty touristy areas so I didn´t hear much of the Rheinland accent, though I saw it in writing in some places. The culture there was different than Berlin – it wasn´t so international, it just felt very German. And people there were proud to be German! There was this sense of regional pride I don´t see in Berlin, but that exists in Bavaria. The Rheinland (area near the Rhein river) is the oldest part of Germany, I mean, even before Germany was a unified country (which wasn´t until 1871 by the way – extremely recently) Germanic people and tribes were living there. Bavaria was its own kingdom until relatively recently, so I guess this area really is original Deutsch. I still think they´re weird, what with the costumes and such, but I definitely got a new appreciation for a different part of German culture on this trip.

Internal and external communications expert. Currently based in: Hamburg, Germany.